No.  Though more than ever is known about how magnetism behaves, there are still mysteries to uncover - as proved on our SCIENCE PAGE

We also sell generic FROM-ABOVE ELECTROMAGNETIC products - which have been around for almost a century, and which use a simple feedback-controlled electromagnet situated just above the levitated permanent magnet.

The fourth kind of levitators we sell are called DIAMAGNETIC LEVITATION devices - and they can suspend a small magnet in close proximity to an element such as graphite or bismuth with no external power or spinning required.

Also, we sell SUPERCONDUCTING levitation kits that use liquid nitrogen to cool the elements to extremely low temperatures, and can levitate a permanent magnet over a piece of pyrolytic graphite  (a form of specially manufactured carbon).

In addition, we also sell a wide variety of MAGICALLY MAGNETIC TOYS AND NOVELTIES, including vintage and modern Whee-Lo type-toys, as well as many other toys, gifts, and decorative items - like levitating clocks, automated Zen gardens, and a variety of science kits involving magnetism.

Finally, we also carry a number of LEVITATING AND FLYING TOYS that don't involve magnetism - but which we just couldn't resist.

What's so special about pyrolytic graphite?

What's so special about pyrolytic graphite?

A few materials can be made to levitate stably above a permanent magnet, or to stably levitate a permanent magnet over it. Although magnetic repulsion is easily achieved between any two magnets, the natural shape of the field always causes the upper magnet to push off sideways, so that stable levitation is impossible (see “Earnshaw's theorem”).  Strongly diamagnetic materials, however, can levitate above powerful magnets, and with the availability of rare-earth magnets developed in the 1970's, the diamagnetism of pyrolytic graphite - when it's brought to a very low temperature - makes it perfect for creating this form of levitation.  In addition, the “Meissner effect” can causes a magnet to rise up magically over a some graphite, as the graphite is cooled down to its superconducting range. 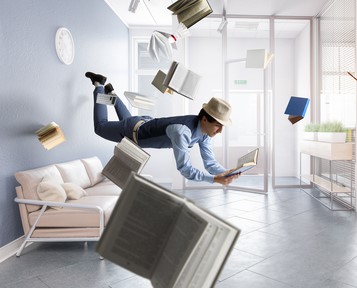