What is From-Below Electromagnetic Levitation Technology?

It is a patented low-cost electromagnetic LEVITATION technology that makes it possible to float any object in mid-air with nothing above it. It consists of an object which levitates in proximity to a “base”.

How the Heck Is That Possible? Is It a Magic Trick?

Some call it REAL MAGIC. Okay, it’s not real magic, but it is SCIENCE masquerading as magic.

Concealed inside the levitating object is a permanent magnet (don’t even ask how magnets do all the amazing things that they do). Never before has the unique property of permanent magnets been harnassed to create FORCE AT A DISTANCE with such a shock and awe effect.

(Scroll down a couple of paragraphs if you want a more detailed scientific explanation.)

How Does This Levitation Technology Work? 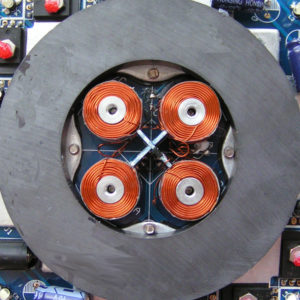 The base contains magnets, coils, sensors, electronics and a power source. The floating object is already partially levitating thanks to the arrangement of permanent magnets. However, since the laws of physics (specifically “Earnshaw’s Theorem”) dictate that it’s not possible to support a permanent magnet in a stable manner using only static magnetic fields, the sensor is employed to send a signal to the control circuit, which uses the information to trigger the electromagnetic coils, which provide whatever additional force is needed to keep the levitating magnet “in the zone”.

The floating object can be suspended in any direction, while all the technology responsible for the suspension is contained entirely within the compact base unit.

This unique design creates a sort of “tractor beam” that can reach out and hold the permanent magnet concealed inside the floating object in a most magical “anti-gravity” way.

It’s not anti-gravity because it’s not actually negating the force of gravity, it’s counteracting it. And, amazingly, it doesn’t even need gravity to operate. So you can even take it to outer space to keep all your weightless knick-knacks from floating away.

There is no theoretical limit to the levitation height, or to the size and weight, of the levitating object – other than cost and practicality. And even large units require very little electricity since the bulk of the levitation is achieved by the permanent magnets.

The characteristics of the levitation can be tailored to meet the needs of infinite applications, ranging from tight-and-rigid to loose-and-bouncy. The levitating object can be made to move in any direction, and to spin or come to rest always facing the same way. It can be animated, illuminated, or flown around a display or game base. The levitating object can even be flown around the outside of a sphere or over the continuous surface of a Mobius strip.

So this awesome invention is the first “democratizable” levitation technology, able to create inexpensive, magical, “antigravity” entertainment for the masses.